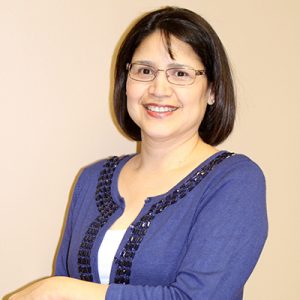 Margarita Arroyo is the Director of Integrated Services (Medical/Dental) at La Mision Family Health Care Clinic. In this hands-on role, she is responsible for the oversight and day-to-day management of the Facilities Department, Medical Department, and Dental Department for the La Mision Clinic. Mrs. Arroyo is a Project Management Professional and a Licensed Clinical Social Worker. She has training in Six Sigma Green & Black Belt, and went through Lean Six Sigma for Healthcare.

Mrs. Arroyo holds a Masters in Social Work and in Divinity.

She comes to Ascension DePaul Services having worked with Central Health in Austin, the Travis County Hospital District, and with multiple providers like CommUnityCare, El Buen Samaritano, and People’s Community Clinic. There, she served the safety-net population who are at or below 200% FPL and are either under insured or have no health insurance. Mrs. Arroyo has experience working with the 1115 Medicaid Waiver, Delivery System Reform Incentive Payment, and with Health Information Technology. Additionally, she previously worked on projects to expand primary care access at existing clinics (using two Mobile Health teams) and to expand dental access to pregnant patients & patients with chronic illnesses.